Do I add to the noise or remain silent? 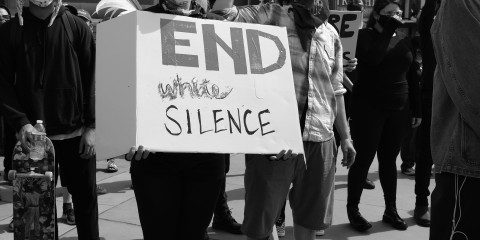 When silence is part of the problem…

I have stood back. Not spoken. Reserved my opinion and watched the world turn itself inside out over the murder of an unarmed black man by a white Police Office in the USA.

Heck! I grew up in the 70’s and 80’s where at school, Aboriginal studies comprised of one chapter at the rear of a book all about the flora and fauna of Australia! That was my education about Indigenous Australians and I am ashamed. Literally, I learned about the Eucalyptus tree, the banksia, the kangaroo and Koala and lastly but in equal measure, Aboriginal Australians. IN THAT ORDER!

My fault? No. But equally, I am ashamed.

My shame runs deeper because I now know, that my remaining inactive for most of my life over such issues has allowed the systemic inequality to persist and breed.

This past week I was introduced to a new term called #slacktavism. It relates to that warm glow you feel when you watch a feel-good movie or video where someone rescues a dog or a whale that has been trapped in netting or who gives money to people on the street. The problem speaks to a bigger problem where we get sucked in to believing that someone else is already helping and doing the “good” work, so I don’t need to. Apparently, the “do good” videos are an industry to themselves and attract a certain set of people who remain #slacktavists.

I do not want to be a #slacktavist.

Privilege is the greatest enemy of right

The rioting, looting and brutality that has resulted from the protests in the USA are not examples of activism. These are people who have become dis-regulated and are opportunists. This is anarchy not activism. We all know we cannot fix brutality with brutality, nor the abuse of power with an abuse of power.

I am impressed with the nations #activism over an issue that remains so deeply ingrained in a first world culture. I take my hat off to the Mothers, Fathers, Grandparents and children who have been moved to take action. However, to be descended upon by harsh military intervention with the use of tear gas and rubber bullets is simply next level unacceptable and a glaring example of the systemic abuse of power that gave cause for the activism in the first place.

So what is the answer or is there one?

My silence is connivance.

My silence is part of the broader problem

My silence stems from not knowing how to tackle an issue that is far bigger than me. Where does one start and at what level is enough to matter?

We cannot stand behind everything we are passionate about and also be active. Or can we?

We can actively practice tolerance and lead with understanding, compassion and diversity acceptance. We can actively choose anti-racism and inclusivity instead of accepting passive exclusivity. We can take small steps in our personal life or workplace to make a stand. We can continue to educate ourselves on matters where we have previously been known to be ignorant. And we can make a stand and draw a line in the sand that says “No More”.

Does it change the life of George Floyd, the man murdered by a US Police Officer? No!

But it ever so slowly begins to chip away at the racial inequality and discrimination that underpins every institution within our society, including the family institution where most commonly, our values and beliefs are handed down from generations.

So I ask you, what is your stance on this issue?

Shared voices are powerful. They create ripples which can create movements. One idea can blossom into bigger causes that instigate change. Please share your stance on this and together, let’s get the conversation started and at least move the needle one degree. For what may be a murmur of change today could be the transformation to a better world tomorrow.

Sam Buckingham is a TV Presenter and speaker trainer. Having studied Speech and Drama with Trinity College of London, she now coaches in Public Speaking and communications skills. Website currently under construction: www.truthspeaker.com.au

News & events
Any questions? Contact us!
Go to Top